home on the range

Help feed and care for rescued farm animals by making a tax-deductible donation to support the Home On The Range benefit. 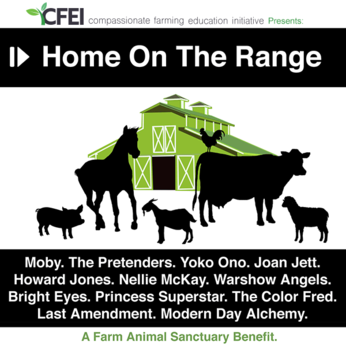 Break Up The Concrete

Performed by The Pretenders

Written and performed by Moby

Performed by Joan Jett & The Blackhearts

Written and performed by Howard Jones

Published by The Color Fred (ASCAP)

Performed by The Color Fred

Written and performed by Nellie McKay

​Written and performed by Justin Sane

​Written and performed by Yoko Ono

Written and performed by Princess Superstar

Pray For My Machine 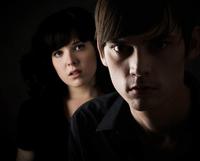 Only available on the Home On The Range benefit album.

Home On The Range will be available on CD and as a digital download through iTunes, Google Music and CD Baby.

The Rock and Roll Hall of Famers fronted by the outspoken Chrissie Hynde join Home On The Range with the upbeat and raucous track 'Break Up The Concrete'. Throughout her brilliant career she's been associated with activism, specifically on behalf of animals. Her many talents and ethical vegan lifestyle continue to inspire generations to come.

From his early days as a DJ, electronic musician, songwriter, and vegan, Moby has been a prominent champion for farm animals and charitable causes. Home On The Range is proud and honored to include an exclusive acoustic and lushly orchestrated version of 'The Day', available only on this album.

Legendary rock n' roller and feminist icon Joan Jett has joined our benefit with the empowering and upbeat  "Make it Back". From her early days in The Runaways to recently becoming a Rock and Roll Hall of Fame inductee, she's always defied convention and is ready to fight for a worthy cause. Animal rights and veganism are very close to her heart, making it an honor to include her on Home On The Range.

As a performance artist, musician, filmmaker and activist, Yoko Ono's name is synonymous with the peace movement the world over. She and her late husband John Lennon, both known for their very vocal political activism and war protests have rallied and inspired people for decades. It is with great honor we present 'Ode To Meadow', a touching memorial to the Lennon's beloved family pet, reminding us that all animals are the same. The song is an exclusive available only on the Home On The Range benefit.

Synthpop legend Howard Jones is one of the defining figures of the 80's MTV generation. His upbeat yet poignant songs covered many topics including vegetarianism and animal rights. Home On The Range is proud to feature an exclusive live version of the classic and thought-provoking track 'Assault and Battery'.

Singer, songwriter, actress and vegan activist Nellie McKay's unique and quirky blend of jazz and pop is showcased here with an exclusive demo version of 'Suitcase Song'. In addition to being featured in our Home On The Range documentary, she's well-known for her stunning and diverse performances ranging from The Threepenny Opera on Broadway to Garrison Keillor's folksy Prairie Home Companion.

Fred Mascherino, the former Taking Back Sunday singer and guitarist is also well known for his solo project, The Color Fred. As an environmentalist and vegan, we're thrilled to have Fred's support and proud to feature an exclusive demo version of 'Complaintor' available only on Home On The Range.

Vegan rapper, DJ and television personality, Princess Superstar's boisterous blend of electronica and rap is featured here with a radio version of 'Sound The Alarm'. In addition to being featured in our Home On The Range documentary, her recent work includes a reality show called 'I Love Princess Superstar' and a single with comedian Margaret Cho.

Penny Rimbaud and Eve Libertine of the influential anarchist punk group Crass joined by Tony Barber of UK's post-punk legends Buzzcocks continue to innovate as Last Amendment. A very special exclusive studio track called 'The First Goat' is available only here on the Home On The Range farm animal benefit.

An outspoken animal activist, Justin Sane is the lead singer and guitarist of the politically-charged punk band ANTI-FLAG. He appears here on Home On The Range with a solo track called 'Cassette Deck, Road Trip, Grand Canyon'.

CFEI founders and vegan activists Karen Ellis-Ritter and her husband Joshua Ritter make up the band Modern Day Alchemy showcased here with an exclusive version of 'Dark Delight'. Both Karen and Joshua are featured in the Home On The Range documentary discussing CFEI's dedication to animal rights and compassion through outreach and education.

Founded by environmental and vegan activist brothers Todd and Eric Fink, The Giving Tree Band is featured here with an exclusive studio version of 'Peace On The Mountain'. Known for their exhaustive efforts to create eco-friendly music, their recordings have been made using 100% renewable solar energy and their earth friendly packaging consisting of all recycled materials. Their distinctive blend of bluegrass and Americana is prominently featured in the Home On The Range documentary.

Conor Oberst, the founder of Bright Eyes emphatically stated in a PETA interview that veganism is the solution to ending animal cruelty as well as improving our environment. We're proud to include an exclusive live version of 'Shell Games' on the Home On The Range benefit.

Electro chillwave band Dropa is fronted by animal advocate Micah Tamblyn, the son of Larry Tamblyn from the 60's garage rock band The Standells. The moody and infectious track "Estimated Arrival' featured on Home On The Range is an emotive blend of post-punk, layered instrumentation and enigmatic vocals.

The bluesy rock outfit The Lovestains is fronted by vegan and 'rock n' roll life coach' Share Ross of the hard rock band Vixen is joined by her husband, Bam Ross of The Dogs D'Amour. The spunky track 'Downtown' can be heard right here on the Home On The Range farm animal benefit.

Singer, songwriter and vegan activist Joy Askew has performed with the likes of Peter Gabriel, Laurie Anderson and Joe Jackson throughout her singing career. We're proud to include a special exclusive remix of her thought-provoking track 'Walk The Dog', available only here on Home On The Range.

Electro-industrial project Sin Corporation is a revamp of the 90's club-charting band 'Spirits In Sin' which included Kneel Cohn and Ron McLin. Presented here on Home On The Range is an exclusive remix of the band's 12" vinyl-only single, 'Pray For My Machine'.